Please enter your username or email address. You will receive a link to create a new password via email.

Last month the estimated real growth, compared to the same period of the previous year, was posted in the following activities:

A decrease was registered in manufacturing and construction.

Will the ban on flights affect the Georgian economy?

How will Russian President Vladimir Putin’s ban on flights to Georgia and restrictions on the import of Georgian beverages into the Russian Federation affect the economy? 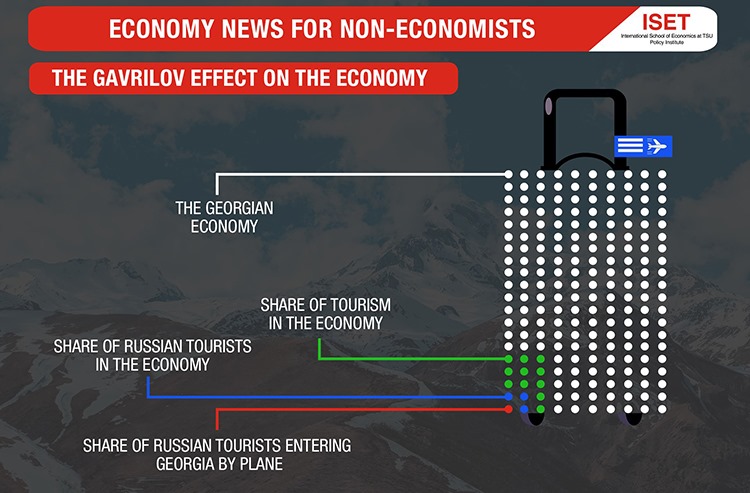 TBC Bank published a study ‘Russian Sanctions: Manageable Impact on the Growth and Still Betting on the GEL’, which says that last year the share of Russia in total inflows (exports of goods, tourism, remittances, and FDIs) stood at 16 per cent with a tourism share of 19 per cent and a significant contribution to growth.

The estimated drop of tourism inflows from Russia may be as high as 50 per cent. Even in this case, we believe the impact on growth is manageable and we are betting on the GEL”, read the report.

Galt & Taggart, investment banking and investment management services company in Georgia, said that dealing with Russian sanctions is not a new challenge for Georgia.

The 2006 Russian embargo forced Georgia to redirect its focus from Russian market, which expanded export destinations and improved quality of Georgian products. This also deepened economic ties with the rest of the world, with EU-Georgia free trade agreement signed in 2014, followed by free trade deals with China and other countries. We believe that upcoming Russian sanctions will further intensify Georgia’s economic diversification, use potential of new large markets – EU and China, and enhance its institutions”, said the Galt & Taggart.

Galt & Taggart states that recent Russian sanctions are expected to weigh on the Georgian economy, but unlike the 2006 Russian embargo, “the country is better placed to deal with negative shocks”.

One of the most prestigious German media holdings in the wine industry, Meininger, has selected 55...